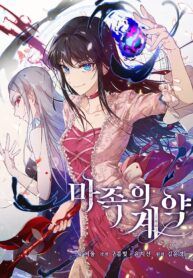 The demon lord’s daughter Yurisina was living a normal demon’s life when she was summoned by a human who was about to die. Not just any human, but the Paedin kingdom’s first princess Marianne. As Yurisina lives on in her body instead, Marianne requests that Yurisina takes revenge on the person who poisoned her.
Asmodian’s Contract / Contrato Asmodiano / Majog-ui gyeyag / 마족의 계약 / Дьявольский контракт / The Demonic Contract

The Princess Imprints a Traitor

Trapped in My Daughter’s Fantasy Romance