Become the family of the villian ss2 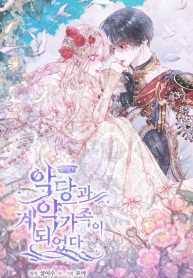 I Became the Villain's Contract Family

Read manga Become the family of the villian on teenmanhua

Sirens: a name derived from an ancient creature, used to describe those who could charm, lure, control, and heal others by singing.

Subjected to live the life of a siren, Aria had experienced, seen, and heard many horrific things. Broken beyond repair, Aria resigned herself to death, when suddenly…

The Grand Duke, Lloyd Cardence Valentine, arrived and whispered, “Should I kill everyone here?”

“If you need me, just call me. Your song will always reach me, wherever you are.”

In the end, Aria called the devil, bringing death to all those present, along with herself.

“Let’s fall down to hell together.”

And with that, Aria breathed her last and died… only to return to her 10-year-old self.

Now that she had a second chance at her life, Aria was determined to change her fate, as well as the cruel fate of her saviour, Grand Duke Valentine.

And so… Aria proposed to him with a marriage contract.

She sold her soul to the devil and vowed to protect him.

[Marry me.] Aria extended her hand and gave him the contract. [Let’s get divorced in 10 years…]

The young duke took the contract from her hand.

“So, where should I stamp the seal?”

“You said you’d divorce me within 10 years.”

The grown-up villain leaned in, hovering his head before he kissed her tenderly over her crown.

“Now that we’re adults, we should sign another contract.”

I Became the Villain’s Contract Family

Elixir of the Sun