Father, I Won’t Do Anything 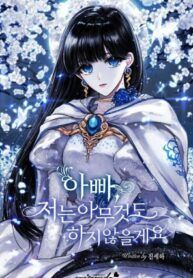 Read manga Father, I Won’t Do Anything on teenmanhua

[Since your birth did not impress me,
So your death means nothing to me.]
A supporting actor was born as a hybrid between a human and a dragon, and died tragically after being abandoned.
Jaina was reincarnated as her, considered an unclean creature and discarded by the dragon tribe in the Devil’s Tower.
And there, I met my father for the first time, Matapju Diamide.
As depicted in the original story, he does not feel any intimacy with his daughter.
It seems, He just looked at her coldly.
“Are you the one who called me, are you my daughter?”
Jaina trembled as he approached and looked down as if appraising.

“Blue eyes… … But that’s not proof that she’s my daughter.
Perhaps you gave me a child born to another human being.”
So Diamide went back, leaving her alone,
Jaina, who had to live in a shabby barn in the tower,
Instead of trying in vain to win the tower’s owner’s eye,
Until his death, he decided to do small luxuries that he had never experienced in his previous life.
location… … .
“You don’t have to think of me as your daughter. I also call Lord Matthew my father.
I won’t call you”.
“… … . ”
“Lord Matop?”
However, the father, who should be indifferent, begins to appear obsessive little by little?
Dad, can you leave me alone?

I Made a Deal with the Devil