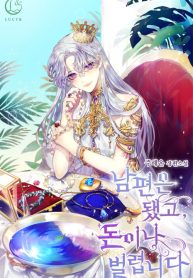 I became the wife of a man who had a mistress. Then I must have kept his innocence, right?
“Sleep on the floor”
“What?” The eyes say I don’t want to!
No matter how hard the floor is, I have no choice.
“I’ll just hold your hand and sleep. Trust me”
But, why did the bed break on my first night with my husband?
***
Aristine is a princess imprisoned all her life, not allowed to be in front of the emperor. But the fact that she was the possessor of the [Eye King], she could see both the future, the present and the past.
She became the scapegoat for a political marriage, marrying a fearsome barbarian…
“The most precious things should be given to my wife.”
The person who will soon become my husband seems very strange, but it is much more ordinary than I thought
However, he has a mistress.
“I have to make money quickly”
Will Aristine really achieve her dream of living freely on a pile of money?
Or will she end up killing two birds with one arrow that hits two targets?

Happy Ending for the Time-Limited Villainess

A male protagonist is blocking my way ss2

Mrs. Bo Was Stripped of Her Vest Again Today