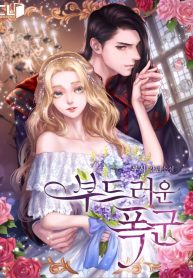 Erika, a girl who lost her mother in the war and was bullied by her aunt.

Political interests lead her to a political engagement with one of the most feared beings in the Empire, the Emperor of the Empire, Kaal Lakin.

The cruel tyrant that everyone fears, Kaal Lakin.

In his harem there are as many princesses as the stars,

All the women who ascended the throne were carried away as corpses.

‘Why? Why are you looking at me with such sad and painful eyes? ‘