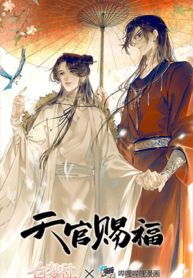 Official Heaven’s Blessing
Eight hundred years ago, the pure and noble Crown Princess, Xie Lian, was a child of heaven.
However, who knows that after ascending to heaven, achieving immortality and becoming a Martial God worshiped by thousands of people, his life will only go downhill.
He was demoted and relegated until bottoming out. Eight hundred years later, Xie Lian ascended again, but this time he had neither followers nor any incense burned in his name.
One day, on his way back from picking up trash, he picked up a mysterious young man and he brought it home. However, this particular young man turns out to be Hua Cheng, the infamous Demon King of the three realms, who can change both his gender and appearance with just a penny.

The Duchess of the Glass Greenhouse

The Scandalous Secret of the Crown Princess