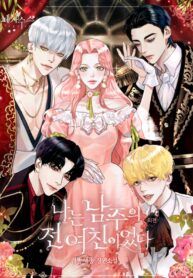 My role in the novel begins with the appearance of the heroine: the woman who’ll change the life of the male lead. To sum it up, I’m supposed to cling to him and beg for his affection. The original Erika was a nasty ex-girlfriend. I didn’t want to be a s*upid villainess, so I put myself first and distanced myself from him… And yet, 3 years later, this very man reappeared in front of me. What a strange thing… This shouldn’t be happening…
“I don’t think I can do this without you. I still like you.”
What is this…? I’m not the woman you’re supposed to be obsessed with! And coincidentally, Zion – Leonardo’s best friend – has been acting strangely. I felt sorry for his fate as the sub-main character, so I’ve comforted him often… but have I gone too far?
“I like being with you. I like you. Everything will be better if you’re by my side.”
… I’m not the character you should like. I’m merely a villainous supporting character, and yet the men of the novel quickly begin to confess! Who should I choose?
I Became The Male Lead’s Ex-Girlfriend

Flowers Not in Full Bloom