I Became the Younger Sister of a Regretful Obsessive Male Lead 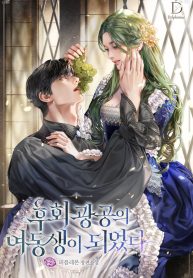 I Became the Younger Sister of a Regretful Obsessive Male Lead Average 4.7 / 5 out of 111

Read manga I Became the Younger Sister of a Regretful Obsessive Male Lead on teenmanhua.com

I reincarnated as a character in a BL webtoon.
I’m the only one leaving malicious comments in the series <In the House of Dolls, There’s Another Doll That Lives>
Above all, I became the adopted sister of my favorite character, Lucianne, the obsessed male lead. The person would later regret his actions, but still die with the duke in the end.
So I made up my mind. Ever since the beginning, when I reincarnated into this world, I couldn’t just stand by and watch my favorite character. Plus I don’t want to die.
So, author, I need to change the ending of this webtoon a bit! From tragedy to happy ending.
“Brother, please smile like that in front of other people.”
I say so to Lucianne, who doesn’t smile even a little in front of others.
“…”
Is this a somewhat unexpected request? Lucianne was looking at me with a strange expression.
“If you can do this request, I’ll give you a present”
I say that because I want to help him in any way I can. But he looked at me for a moment and hesitated before answering.
“Gift…is it okay?”
“Of course it is!”
The moment I answered with a confident face, his expression immediately changed to that of a starving predator…
Am I mistaken?
Then, Lucianne calmly replied with an expectant expression.
“Give me your selves, Rachelle”
Huh? What did he just say? What did he just ask for?

This Life, The Way I Want

It’s Useless to Hang On