I Only Came to Find my Dad 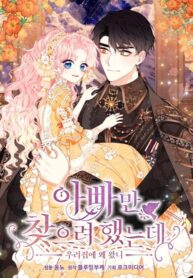 Read manga I Only Came to Find my Dad on teenmanhua

Despite her lack of father, Louise lived happily with her mother.

Then one day, with her mother’s death, her happy life came to an end.

As her self proclaimed guardian, her uncle Benjamin, a scumbag who coveted her mother, took her in as his niece.

The only rebellious thing that little Louis could do whilst in her uncle’s grasp was to kill herself.

Her mother’s words, “Dad is alive” were the only clue she had, and that would eventually change her fate in this life. I escaped from Benjamin and barely made it to my dad’s house… but he wasn’t the only one there…?

I Became the Tyrant’s Translator