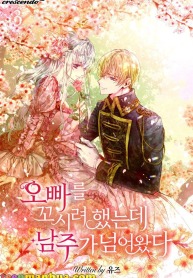 I Tried To Persuade My Brother And He Entrusted The Male Lead To Me Average 3.8 / 5 out of 31

Princess Clara fell in love with the abducted male protagonist. The Young king of Verona, her older brother was the one who kidnapped him from the Neraha Empire. The princess was a side-supporting character in the book Adriana, who helped the protagonist, Prince Daniel escape. ‘I would not live like that. ’So

One Step Away From Happiness

Living As The Emperor’s Fiancé