I Want to Escape from Princess Lessons 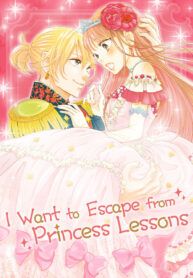 Leticia has been taking princess lessons ever since she was chosen to be the betrothed of Prince Clark of Astar when she was little. As someone who loved fishing and climbing trees, being a prince’s fiancée and having to undergo those lessons was painful to her. She was able to survive with the hope that one day, a different candidate to become the princess would appear and the engagement would be called off. One day, Leticia saw the prince escorting an unknown woman. She delighted that her dream of the engagement being called off had come true, but actually…? A dizzying, heart-throbbing battle between a potential princess who wants to break off the engagement and the prince who wants to marry her is now underway!
I Want to Escape from Princess Training / The Me Who Wants to Escape the Princess Training / Hikyouiku kara Nigetai Watashi / The Me Who Wants to Escape the Princess Training / 妃教育から逃げたい私 / 想摆脱公主教育的我

The Duchess Who Sees Ghosts

I Went On Strike Because It Was A Time Limit