Let’s Do It After We Marry 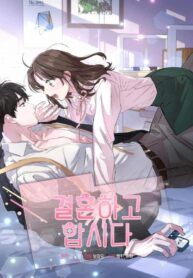 Let’s Do It After We Marry

Mo-Ah is a non-marriageist. Always affirm that: “I will never get married in this life!”
Until one day, she has to face her boss Geon-Hu. He’s very strict and has a penchant for… nudity.
“But it certainly can’t be true…”
You’re thinking so, aren’t you? such a form belongs to a human?!
He is as great and brilliant as a statue of art. To the point where she immediately forgot her shame and couldn’t take her eyes off him.
After witnessing Geon-Hu’s naked but perfect body, Mo-ah suffers terrible consequences.
Wherever she was and whatever she did, all she could think about was his silhouette.
Mo-Ah heartbroken confesses to him one night while drunk.
“Sorry… Captain, can I sleep with you for once?”
It was a confession she certainly couldn’t have made if she were sober. There was a slight regret the moment those words left her mouth. But his answer was an even more troubling one:
“I’m sorry, but I wouldn’t, unless it was with the girl I was going to marry.”

Feelings In A Dream