My Three Tyrant Brothers Average 5 / 5 out of 5 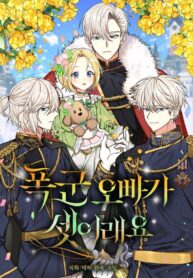 Given a name from the days of the week. As a slave she was called Wednesday. When she was on the verge of death because of a small revolt, “—finally found you.” Just overnight, I was told I have three older brothers. Apparently, I am the key to undo the curse on the Askanier Imperial Family. “You need to be healthy enough for your clothes to feel tight, to the point where you can no longer wear them. That is your first task.” “Don’t worry, kiddo. All the bad guys will be punished by your brother.” “You look like a chick. Small and weak. I’ll protect you.” But why are the brothers that are called tyrants being so sweet to me?

On the Emperor’s Lap

Hero? I Quit A Long Time Ago.

Saving the Villain Who was Abandoned by the Female Lead