Somehow I Raised A Prince 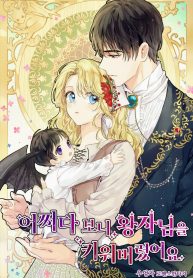 Read manga Somehow I Raised A Prince on teenmanhua

When the egg was rolled in her arms, the dragon was born.

One well-bred dragon prince of one of the ten emperors.

Adele is a girl who grew up in an orphanage and came to her uncle’s house.

While being in charge of her aunt’s farm for nine years and taking care of all the insane things on a cow ranch, she accidentally finds a large egg in a tree hole. A child who wakes up from the egg follows Adele like a parent, and Adele gives the child a name, Sigmund.

In fact, Sigmund, who must be the Emperor of the Empire, stays with Adele in the form of a child, sealed with his powerful mana sealed.

Grand Duke Ernest and Archmage Jensen try to find the egg of the lost dragon.

Lushen, head of the Imperial knighthood, assisted by Zion, daughter of Grand Duke Ernest, who has grown up as a man since childhood helps Adele.

Adele and Sigmund finally enter the imperial palace where they were awaited.

“You are the beginning and the end of my world, Adele.”

The all-fearing ruler of this world, the violent dragon prince Sigmund and his bride Adele.