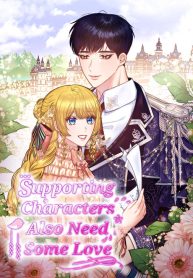 Supporting Characters Also Need Some Love Average 4.8 / 5 out of 8

Read manhwa The Troubles of Supporting a Female Lead / Supporting Characters Also Need Some Love / The Supporting Role is quite difficult / Being a Supporting Character has its Own Difficulty
While driven in her life and supported by loving parents, Mihyang Kim has been a sidekick, shadowed by her childhood friend, Shiyeon. When both of them suffer a fatal accident, Mihyang is reborn as Damia, and Shiyeon is reborn as Eileene in a new fantasy world. Surprisingly, their new lives as Nobles and Socialites in this new world mirror their lives back in Korea, and Damia drives herself to find her own path in life, escaping the shadow of her long-time friend. However, with Eileene caught in a web of royal politics and a large conspiracy slowly revealing itself in the kingdom, Damia must find a way to help her friend, and survive this new world herself!

In The Name Of Marriage

One Step Away From Happiness