The 99th Bride of the Duke 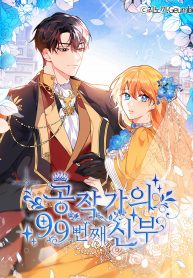 Read manga The 99th Bride of the Duke on teenmanhua

Grace, who lost her mother and became an orphan, was living on the street waiting for her death, was saved by Penelope Erdona and she became Grace Erdona.
One day, while she and Penelope were together, Penelope talked about getting married.
The person she must marry is none other than the Duke of Felton, the most powerful family in the world.
There was a rumor that all the women who got married there had disappeared or returned with a very strange mental state.
To protect Penelope, Grace intends to marry the Duke in her stead.
‘I heard this is not your first time getting married, may I know how many times this is?’
‘Let me see…you’re the 99th.’
Grace Erdona, wake up!

Just A Girl He Knows

The Male Lead Is Mine

I’m a Villainess but So Popular