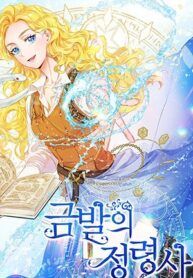 The Golden Haired Elementalist Average 5 / 5 out of 32

I thought I was dead, but when I woke up, I was reincarnated as a nobleman’s daughter?! The only thing I did in the seventeen years of my first life was studying. Now that I’m alive again, I won’t live just to study! The second life of an ordinary middle school girl with a slightly strange personality, Jean, begins an unstoppable journey on this continent!
The Golden-Haired Summoner, 금발의 정령사 / The Golden-Haired Wizard / The Golden-Haired Elementalist / La chica rubia que controla los elementos / La magicienne aux cheveux d’or / 金发精灵师之天才的烦恼

I Became the Chef of the Dragon King

Sweetheart V5: The Boss Is Too Kind!