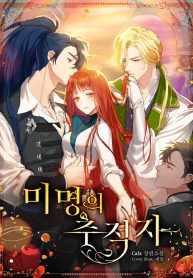 I accidentally spent the night with three men.

One of them was a childhood friend that I hadn’t seen in ages.

One was a feisty elf who I haven’t talked to for a long time.

One of them was a fellow researcher?

To make such a terrible mistake!

Kriserua failed an important quest on that day.

I tried to erase their memories and focus on handling requests…

Eventually, they found out that I was pregnant.

What am I supposed to do with this nonsense?

More than that, I have to deal with failure first!

“If you don’t mind, I’ll live thinking it’s my child.”

“No one is more suitable than me as the father of the child.”

“That day is my responsibility, so I will be responsible.”

In the end, they started chasing after me, who’s on a journey to rectify the mess.

A delightful and exhausting adventure story of Kriserua, a tactless yet straight-laced person, and the unrequited love of three men who can’t communicate with each other!

The Chaser of Dawn

Be My Only Love