The Villainess Wants to Die Gracefully 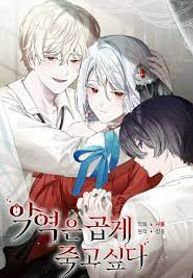 The Villainess Wants to Die Gracefully Average 4.4 / 5 out of 85

Read manhwa The Villainess Wants to Die Gracefully on teenmanhua.com

Wanting to die, he jumped off the bridge and became a vampire who lived forever.
The strongest vampire who appears as the villain in the novel.

No, wait?
Wouldn’t it be easier and quicker to die if you pave a flower path for the vampire hunter Namjoo?

With overflowing time and money, he raised the family that had to be destroyed in the original work to the peasant family.
At this point, will Namjoo grow well?

Then, a 10-year-old male Joo became a reclusive loner.

Then I fell asleep for a while and woke up, and 10 years had passed.
At this point, I thought I could go to die soon, so I appeared in front of the original characters.

“teacher. I don’t care if the teacher is a monster. So please stay by my side again.”
“I don’t believe in God. The only thing I trust is the supporter unnie who raised me up to this point.”

“I made him live as he pleases, he made himself a vampire at his will, and made him tangled up in you,
Are you going to throw it away now? To what extent are you going to make me miserable?”

Even the kid from the purebred family has changed.

“So you too. Everything you want is in my hands.”
What the hell happened in 10 years?

The Lady Wants to Rest

Your Majesty is a Beast