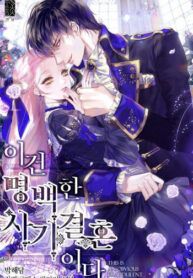 This Is An Obvious Fraudulent Marriage Average 4.3 / 5 out of 45

Read manhwa This Is An Obvious Fraudulent Marriage on teenmanhua

The country of Sophen was destroyed.
The only daughter of an earl family, Leylin Efran, had to find a husband so that she could inherit her family.
She doesn’t want to suffer because of a loveless marriage. Leylin has decided to find a husband, but it will be a contractual marriage with a term of one year.
Responding to her request, a young and dashing man appeared before her.
Leylin believes this is the right man for her, but is he really the answer to Leylin’s perilous situation?

I Became the Villainess in an Anticlimactic Novel