Trapped in My Daughter’s Fantasy Romance 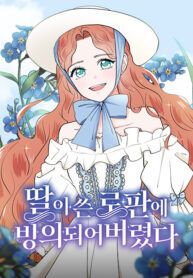 I Got Possessed Into a Romance Fantasy Written by My Daughter / Transmigrating to the Romantic Fantasy Novel Written by My Daughter / 穿进女儿写的欧风小说里？ / 딸이 쓴 로판에 빙의되어 버렸다
Park Soonja stumbles on a mountain and passes out, waking up as the heroine of her daughter’s romance-fantasy novel, Belita Partel. She first enjoys her new life and youth, until it hits her that her daughter is left all alone in the real world. She then tries everything to go back but nothing works. It seems the only way to escape is to marry the male lead of the novel, the crown prince. As she strives to achieve the goal, she unintentionally charms the male characters one after another. Can she ever get out of this novel and reunite with her real daughter?