Virtues of the Villainess 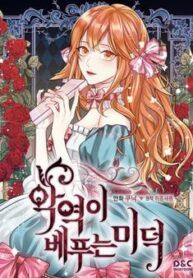 “All I ever did was live my life as best I could, but my fiancé ended up being stolen by my rival, and the man I fell in love with at first sight also loves her too… Gosh, what’s so great about her, exactly?” A novel finds its way into the hands of the tormented Ginger Torte. In this strange novel, which revolves around Ginger and her rival Lerajie, Lerajie is the female lead and Ginger is the villainess…? “All I ever did was work hard in life… but a villainess? A villainess?! And the only reason why things went so well for Lerajie was just because she was the main character!” “Lerajie, you’re the main character?” Fine then, as the villainess, I’ll show you just what virtues I can bestow you. I’ll steal the male lead and make him my man! Ginger, who now knows the Crown Prince Izana’s secret through the novel, attempts to steal him from Lerajie…! Though she lacks 2% cautiousness and accuracy, Ginger Torte tries to seduce the male lead Izana with 200% cuteness!
Ginger and the Cursed Prince / Virtue Bestowed by the Villainess / Virtues of the Villainess / فضيلة كونك شريرا / 反派女主的美德 / 恶役的大发慈悲 / 악역이 베푸는 미덕

The Lady’s Law of Survival

Guide for A Princess-To-Be